At long last the final two build videos are up.  First the painting:

Then the part by part display and photo shoot:

Next project is simmering.

I received my first ever snake bite yesterday. Completely harmless and entirely my own fault.

Molasses the python got a a little too eager when I opened his enclosure with my hand in front of his head. I freely admit that it got my heart going though.

A week of very long days has left little energy for making in the evenings.

In an exciting development I now have fish in the classroom. A small school of Jade Perch to be precise.

The aquaponics system is still some way off functional but we have transferred the fish into a pair of the system’s tanks and plugged in some air-stones to keep them happy.

A number of interesting things have caught my eye this week but i’ll limit myself to only a couple.

If you like me derive pleasure from watching people fail at video gaming in spectacular and amusing fashion. This guy has plenty to offer.

A visitor from the other side of the globe enlivened our weekend.

My good friend Nils, who is over from Berlin to see his partner, drove with her up from Melbourne. They stayed Friday and Saturday nights with us, availing themselves of our camping equipment to pitch tent in the garden for privacy and defense from early morning pounces by little boys. We took it pretty easy, lots of good conversation, rich food and late nights.

Printed him a pinhole camera:

#print complete. A #pinholecamera for a visiting friend. Torn up build plate responsible for the uneven top. #3dprint #3dprinted #3dprinting

I have requested sample images when such have been developed.

I have finally called build complete on the Sir Vader Costume.

I am hopeful of finding time to do a full dress photo shoot on or before the weekend. Getting ready to get started on the matching costume for F using what I have learned making this one.

I’ve also nearly completed the set of three photography sitting boxes for N’s soon to be studio, sanding and painting remain. At work I’ve been decluttering my storerooms and preparing to get an aquaponics system online.

Occasionally I love a good musical, not to often mind, and only if they aren’t too heavy on the soppy songs.

To me this film was beat perfect, a genuine unadulterated pleasure. The vibrant colours, the on point comic timing, the emotional maturity and the ever present set and prop homages to golden era greats. Musicals aren’t for everyone and a glace at the IMDB reviews reveals that even among the musical aficionados this is clearly a contentious film. I contend that it is worth your while, impressive, emotional and fun.

A very hot day in which the only sensible thing to do was hide in the aircon, build Lego and mark maths tests.

One of my best friends arrived in Melbourne from Germany overnight and we watched ‘Arrival‘ this evening.

On first impression it is a sublime film.

Fittingly, I have read and enjoyed the Ted Chiang Story it is adapted from but didn’t make the connection until the credits.

Back at work. The classroom is coming together. Mandatory online trainings are complete and planning is progressing.

Still cleaning my classroom which had a fair bit of teacher and student detritus and disorganised cupboards. Also whipping up a few more classroom elements; today word wall headings and bookwork layout guide posters. One of which I may need to remake at some point. For now finished is better than perfect.

Had a bit of a play with this pretty thing:

and this cool tool:

Both created by Jonas Wagner.

We watched Doctor Strange last night, which is fun even for one who has never read a single issue of his storyline. As with all recent Marvel’s it is more than a little bit silly, ultimately predictable and incredibly visually impressive. It would honestly have been extraordinary in 3D.

A day spent largely in hiding from the heat, mostly in the local library and pool. Aiming to make the best of the evening cool and create some art. Starting with a spot of video editing.

Recently watched ‘The Perks of Being a Wallflower‘ with N.

I found it engaging and enjoyable, if a bit saccharine and emotionally manipulative. The portrayal of drug use for comedic effect was let down by the obvious lack of experience. It passes Bechdel, it has great music and it treats its gay characters with respect. The depression and mental health problems of the protagonist are treated as acceptable issues for anyone to deal with. I think it is likely a valuable film for it’s target demographic.

Maybe the week before Christmas wasn’t exactly the best time to try and adopt mindfulness habits and healthy eating. Better than on January first I guess as I actually achieved my goals for a number of days straight before heading into the Travel and Festivus nosedive. We are emerging out the other side now, re-accustoming ourselves to our Cobar home and the thousands of little jobs needing addressed around the place. One day back and it is a bit overwhelming.

Today we put up calendars, made lists, cleaned, sweated and swam. I have a little under three weeks until work starts as we start term 1 late in the Western district and it is going to be a very busy time.

For now I’ve read, watched and enjoyed a couple of good things over the last week, here are a few to share:

I have been slowly updating my security settings and now habitually use a VPN, as should you. I am still sometimes surprised by how exposed I am: What every browser knows about you.

Somehow I missed this hilarious re-dubbing of one of the Star Wars films which does not exist, using as script; the English subtitles on a pirated Chinese DVD. Contains the origin of the ‘Do Not Want’ meme.

If you follow UK media, which I do vaguely but with some extra exposure this year, Charlie ‘Black Mirror’ Brooker’s 2016 Wipe is an entertaining hour.

Wait But Why on how much time we have.

Finally I don’t want to come off all news hipster or anything but I have been following the Centrelink debts fiasco since mid November when the first stories about false debts from as far back as 2011 began surfacing on r/Australia. Mostly out of worry for myself and my friends, a number of whom have gone on and of student payments in that time frame. For those not following Centrelink has introduced a spiffy new algorithm wherein they compare your taxable income as reported by the ATO and look for as many ways to issue a debt based on that as possible, including but not limited to dividing the total by 26 fortnights even if you were only on a payment for a tiny fraction say one fortnight of the tax year.

Anyway I didn’t write about it then, and now, well now bloody John Birmingham has just written such a face melting burn of the whole malignant mess and the myopic machiavellians orchestrating it that it simply cannot be topped.

From this delightful Sesame St clip with the help of Giphy

Yesterday we spent the morning feeling disillusioned about the fate of humanity in Sunshine Plaza shopping center Maroochydore. Politics and global ecology can wait though, because then we went and saw ‘Moana‘. Marking F’s first cinema experience and L’s second. Moana is a good Disney, one of a number lately. Well balanced, without romance or princes, a good strong female lead and an entertaining though very stupid male sidekick oh and a pretty funny demigod. Some touching moments, treatment of Hawaiian culture felt respectful, a good hero’s journey all round. Other adults in the party went to ‘Rogue One‘ and ‘Fantastic Beasts‘. We followed up with a dip in the ocean/estuary at Cottontree and a barbecue before the long drive back to Crystal Waters.

N and I stayed up for midnight local by watching the altogether rather fun ‘Edge of Tomorrow‘  I almost forgot I was watching Cruise for a minute or two in the middle of the groundhog day war.

Today we took a dip in pebble pond and hid from the heat as best as possible. Tomorrow we head back to the city for a few nights before returning home to western NSW.

Last night we spent N’s birthday gift of Gold Class tickets to the cinema seeing that latest film in that galaxy I like.

Fortunately there was nothing else particularly compelling competing with it as the conversation went as follows:

“Which film do you want to see and why is it Rogue One?”

First impressions only this evening.

Put simply it was a joy. Everyone who has seen ‘A New Hope‘ (1977) knows how this film ends. The challenge and the art of it is in giving us a bunch of characters to care about and in making the audience believe that the stakes were high and success in the mission is not guaranteed.

The characters are engaging, easily empathised with and at times quite moving. The aesthetic and style is absolutely nailed throughout. Hair, costume clothes it fits in right before episode four perfectly.

There are some genuinely wonderful cameos. The reconstructions of some actors are distinguishable as CG but barely and on the whole are an extraordinary achievement. It even has for my money the best cinematic villain of all time showing exactly why he is such an infamous character in fantastic style. 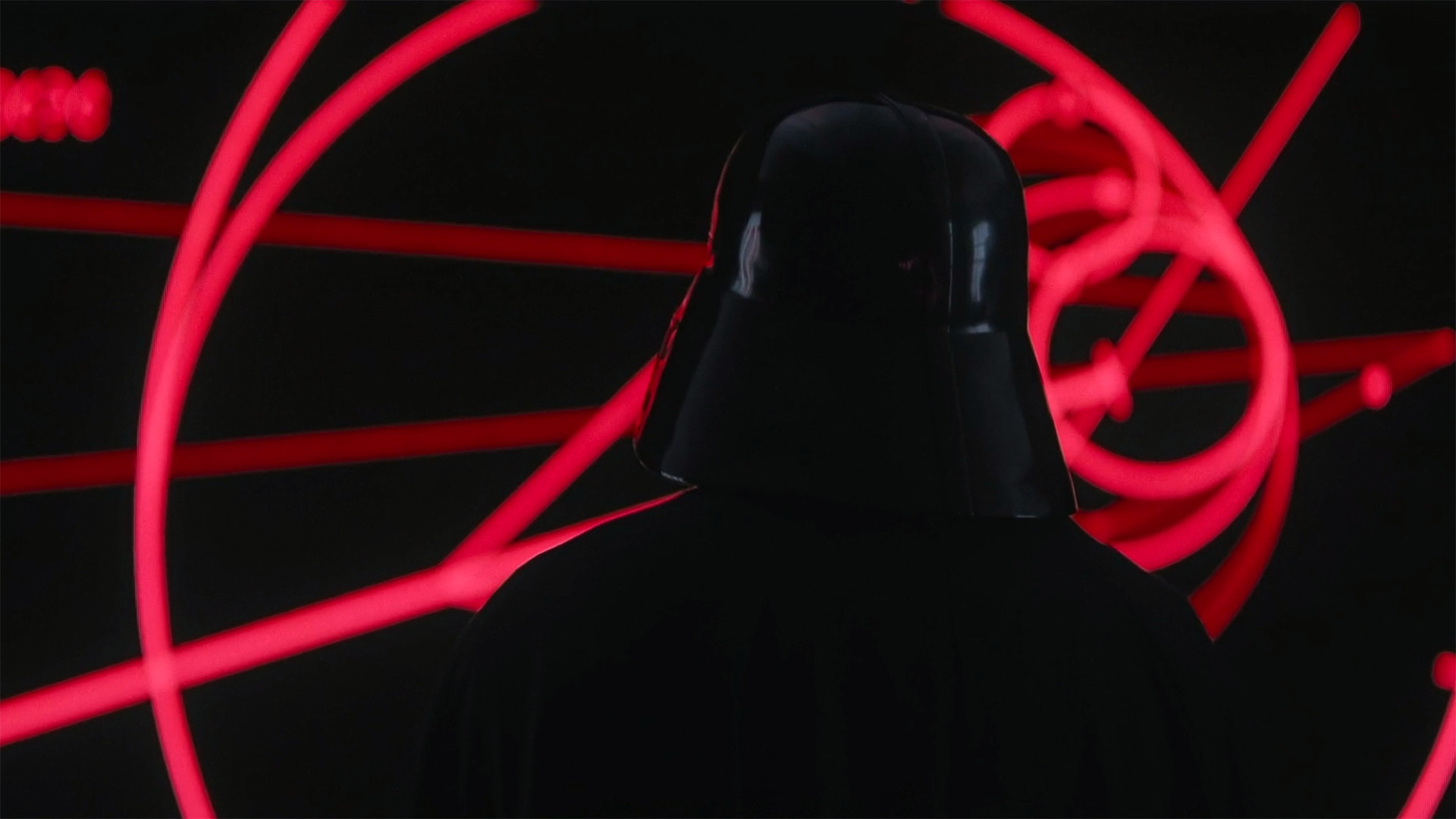 This shot is not actually in the film. But it looks cool enough to include.

There is none of the pompous ponderous exposition that characterised the prequels. It felt well paced throughout. It is a war movie and for N’s taste it is a little heavy on the battle scenes. That said I think it probably has the best Star Wars space battle to date. The action is compelling, well choreographed and entertaining.

The cinema we went to allowed us to see Chermside shopping centre in full pre-Christmas glory. Packed to the gills and pumping at 11 O’clock at night with more people flooding in as we left, totally bizarre and apparently to be open all night. I’d love to have seen the 3AM wasteland.

Today for N’s birthday we had a scrumptious breakfast out, went swimming and had ice cream at Southbank. This afternoon with just the two of us we pushed our physical limits at Bounce. Which is amazing, if I lived closer I would need a membership as I haven’t had so much physical fun in ages.

Tonight we get to play the Santa game.

A good but expensive day. On basis of getting to see a cousin and being able to make two important purchases we ventured into Melbourne instead of exploring the local area today.

We have a new high chair for F. The same model as his big brother’s a Stokke Trip Trap* (links at the bottom of the post as I am writing on mobile) which is an excellent and adjustable chair. Purchased for a bargain off gumtree.

The second, also a chair,  is an Ikea Markus office chair. I have been working in either a folding plastic or an ancient vinyl dining chair since we moved to Cobar and it has been doing my back in. N is in the same situation but unfortunately the chair she liked best was not in stock.

It being IKEA we didn’t get out completely unscathed but we avoided a flat pack argument and the worst of the self assembly mental conditions on offer. Ate cardboard fish and chips and were in and out in under three hours. A family record.

This evening we watched ‘Source Code’  and ‘Hardcore Henry’ both interesting in different ways.